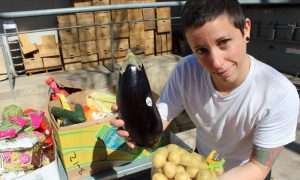 Today we’d like to introduce you to Hayden Dansky.

Hayden, before we jump into specific questions, why don’t you give us some details about you and your story.
Boulder Food Rescue began with a group of friends, a tragic reality and a strong desire to create community-wide change. I started becoming interested in food because it was such a tangible thing we interact with every day of our lives – when I realized that we use an immense amount of resources to grow food and then throw almost half of it away, while so many people don’t have access to it, we were all struck to do something about that. We were seeing so much healthy and fresh produce in our neighborhood dumpsters, and couldn’t help but to try something.

BFR was developed in 2011 by Caleb Phillips, Becky Higbee, Nora Lecesse, Helen Katich, and myself. Caleb and Becky and one other friend Rhonda Hoeingman at the University of Colorado conducted research that discovered enough food is thrown away to feed everyone who goes hungry in Boulder and Broomfield Counties.

For myself, I grew up in a single-parent household where we primarily ate canned and microwaved food. I didn’t know about food systems until I was an adult, and these very friends were the ones who taught me about health, growing food, food systems, how to cook, and why it matters. Food became a thing to connect over. It enabled me to build relationships that ultimately changed my life. Food, no matter how scarce or abundant, has always been a thing to share with others.

We started using food that would have been wasted to host huge meals for our community. To do this, we reached out to local grocers and learned that much of their products could not be donated to food banks because the food was too perishable or because of policy restrictions, which amounted to thousands of pounds of nutritious food being thrown away every day.

Together, with the food donors, we developed systems for donation and took food directly to a meal we started called Food Not Bombs. People there told us that it was (a) the healthiest meal they got all week, and (b) it was different because we all sat down and ate together. They said that mattered because we blurred the lines between who was serving and who was being served. We created systems that worked for everyone and used food as a tool to build relationships. BFR quickly grew from five friends to hundreds of volunteers, picking up food 15 times a day, every day of the week, by bicycle.

Furthermore, they found that food insecurity is hidden in the cracks of the marginalized communities and there isn’t always an easy solution. In order to provide food to those who may not have access to traditional sources, we began donating fruits and vegetables to unique places that do not commonly handle food, such as low-income housing sites, elderly homes, mental health facilities, preschools, daycares, and more. This is where the No Cost Grocery Program was born. We now have over 30 sites that operate in this way, through residential leaders who are active parts of these systems.

BFR has grown beyond the city and we have a network of 23 organizations across the country doing this decentralized, community-based food access work.

Great, so let’s dig a little deeper into the story – has it been an easy path overall and if not, what were the challenges you’ve had to overcome?
When we started BFR we had no idea how it would grow! We wanted to make positive change in our community, but we’ve had to learn a lot along the way. We became a 501(c)3 nonprofit so that we could have food donated from grocery stores. That meant developing a board, writing bylaws, and becoming official. It meant we had to learn how to fundraise for the organization. We started as a scrappy and thrifty organization, so we have had to learn how to fundraise to sustain our work so that it doesn’t become exhausting for anyone taking on too much.

Getting food donors to sign on and stay consistent has always been a challenge. Store managers are extremely busy and may not want to develop new systems of donation. Also, grocery stores have one of the highest rates of turnover, so it has taken a lot of consistent work to establish protocol and institutionalize donations. Luckily, many store receivers and managers have helped us along the way to do this, so that the systems stay even if they leave.

We hired our first paid staff (myself) one year later to get the organization off the ground. We now have eight staff members and many more programs around education, participation and research. With a growing organization, we’ve had to learn a lot about how to work together. We operate in a model of shared leadership and power. We work together to develop our programs, our strategies, and our protocols. We have consent-based decision-making models and work to dismantle traditional forms of hierarchy and power.

This is hard work, but it has led us to be a well-functioning team of people who love our work and our relationships. We believe these values should be reflected both in our programs and in how we work together. In order to get here, we’ve had to have a lot of conversations along the way, mistakes and failures. But we are a well-functioning team of people who don’t always fit into traditional work environments – we are comprised of lots of queer and trans people, people of color, and folks looking for an alternative way to work, that values relationships, trust and care.

We’d love to hear more about your organization.
Boulder Food Rescue’s goal is to create a more just and less wasteful food system by increasing access to healthy fruits and vegetables and removing barriers to accessing food. Today 1 in 8 people in the United States are food insecure, meaning they have limited or uncertain access to adequate food while we simultaneously throw away 40% of the food we produce. The unique model of BFR simultaneously addresses both of these issues by distributing healthy food directly to these communities, working with resident leaders to distribute the food amongst their neighbors, called No Cost Grocery Programs.

This participatory and community-based approach creates inclusive leadership within our programs, blurring the lines between who is serving and who is being served. This means that people receiving food are leaders in the distribution processes, have a voice and a hand in how things are done and are able to create and maintain programs that work for them, which develops greater self-sufficiency and well-being for the families involved.

This approach also bypasses the traditional food banking hub model cutting down on the time between when the food is donated and when it is consumed. So we are able to redistribute healthier, but more perishable, produce well before the end of its shelf life. BFR currently picks up such foods every day of the week, averaging 12 deliveries and 1,500 pounds of food per day. To date, we have recovered over 3.2 million pounds of food, to over 17,000 people in Boulder alone. And, to minimize environmental impact, we do as much as possible by bicycle!

It seems so simple to involve the people who utilize the food in the programs and decision-making processes, but it is incredibly uncommon amongst nonprofits. Nonprofits follow traditional charity guidelines that set up systems of power and saviorism, and often perpetuate the problems they are trying to solve. This work is more than food distribution – it’s working to actively dismantle the systems that cause folks to be food insecure in the first place. It utilizes food as a tool to build relationships, build community, and ultimately create new systems that work better for communities. It looks to see what is at the root of the issues and work towards creating change at the root of things.

We can see that it works. This model of No Cost Grocery Programs is starting all around the country. Our peer learning network of food rescue organizations now has 23 different cities across the US called Food Rescue Alliance. This is a growing movement, addressing many problems at once, and utilizing the voice of all to make active change in our communities.

What moment in your career do you look back most fondly on?
Last year we were celebrating the launch of our participant-driven recipe book, where participants of our programs contributed recipes using commonly received BFR foods and we created a bilingual cookbook to give out to all of our programs. The entire idea was fantastic because it is a perfect example of individuals receiving food coming up with solutions to make it easier for their own communities to utilize it, and actively working to make change. In the middle of the launch party, which included participants of our programs, financial donors, and individual members of the community, as I was speaking about our work, someone came up to the mic and said, “Hey I want to say something!” She then went on to talk about receiving BFR food and how much impact it has had in her community.

Then, someone else raised her hand to say something. I went over to her, not knowing her personally or what she had to say, and she went on to talk about how BFR food was so significant in her life, getting out of the hospital and needing fresh produce. They didn’t know me personally, but they felt compelled in that moment to tell people the impact that BFR had had on them. They wanted to utilize their voice to make a change and even though I had no idea what they wanted to say, I think it was a great example of why trusting people is so important for our organization. The speech wasn’t a pre-scheduled contrived version of ourselves. It was authentic and meaningful and true. It reminded me why we do this work and why we build relationships and trust people to make change for themselves.