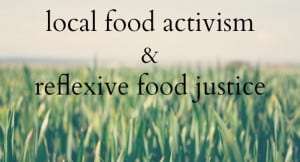 For some, the act of buying local food means fighting global corporate power. For others, “going local” reinforces structural oppression that links one’s socioeconomic class to accessibility to healthy food.

Many scholars’ answer to this question is that “going local” is not a perfect solution, nor is it the only solution for addressing food injustice (p. 6098). In “Just Food?”, E. Melanie DuPuis, Jill Lindsey Harrison and David Goodman (2011) explore how contradictions arise in local food activist groups’ rhetoric and offer an alternative approach on how to evaluate values and processes involved in engaging in (local) food justice activism.

Without a historical understanding of past oppressive relationships between different groups, favoring localism in food activism and in other arenas can support nativism, xenophobia, racism, classism, and other forms of oppression (pp.6185-86).

As for activists of the food movement, the scholars of “Just Food?” offer that these groups’ advocacy of local food features barriers to inclusive food justice because their work is informed (and somewhat limited by) different ideas of justice (p. 6605).

“How do you engage in food justice activism without being hypocritical or oppressive at some point?”

Drawing upon the authors’ insight, it seems that messing up is inevitable. However, striving to be consistently critical and self-reflective is a good start (p. 6195). Rather than advocating local food as the panacea for food injustice, instead, activists could do their historical homework and recognize that the “local food approach” has great aspects, but is also imperfect.

In light of the complexity of food movement politics, DuPuis, Harrison, and Goodman (2011) offer that food activists should adopt a “reflexive” view of justice in food activism. As defined by the authors, reflexivity is “…a process by which people pursue goals while acknowledging the imperfection of their actions” (p. 6201).

It’s important to remember that one’s intentions do not always perfectly mirror one’s impact. A group’s process for engaging in activism and all of its unexpected implications is important to consider.

2. Remember past and current inequalities while engaging in (local) food activism.

“…we need to realize that the white flight and localist “upzoning” contributed to urban sprawl and that localist education policies contributed to the maintenance of an undereducated underclass in the United States, we need to understand the ways in which privilege, class, and status struggles contributed to the rise of the industrial food system that now threatens the health of the entire population (DuPuis 2002).” (p.6229-6237)

3. Reflexivity is not about having a strict set of values.

I’m still learning, but the “reflexive” approach seems to operate from flexibility and pluralism (p. 6264). Referring to critical race scholar John Brown Childs’ (2003) idea of “transcommunality”, reflexivity does not adhere to one moral dogma, but rather embraces cooperation among diverse views. The element of “transcommunality” in reflexive food justice work refers to fostering mutual respect for identities without forcing assimilation and celebrating the existence of a myriad of approaches (p. 6265; Childs, 2003).

Alkon, A.(2008). Paradise of pavement: The social constructions of the environment in two urban farmers’ markets and their implications for environmental justice and sustainability. Local Environment 13 (3): 271-289.

Childs, J.B. (2003). Transcommunality: from the Politics of Conversion to the Ethics of Respect. Philadelphia, Pennsylvania: Temple University Press.