1 in 5 transgender people have experienced homelessness at some point in their lives. 1 in 8 have been evicted due to identifying as transgender. An estimate of 41% of trans people have attempted suicide in their lifetime. Trans folks of color are 6 times more likely to experience physical violence when interacting with the police than white, cisgender people. Twenty-two trans women of color were murdered in 2015. It is imperative for cisgender people to work alongside trans folks to combat transphobia in the United States. 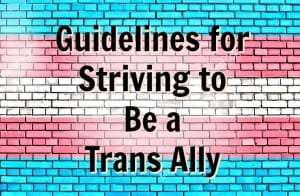 There’s a multitude of resources out there about working to become a better ally to trans folks. These are some guidelines are from MIT’s “[email protected]” publication.

“Don’t assume you can tell if someone is transgender. Transgender and transsexual people don’t all look a certain way or come from the same background, and many may not appear “visibly trans.” Indeed, many trans people live most of their lives with very few people knowing their trans status.

Be careful about confidentiality, disclosure, and “outing.” Some trans people feel comfortable disclosing their trans status to others, and some do not. Knowing a trans person’s status is personal information and it is up to them to share it with others. Do not casually share this information, or “gossip” about a person you know or think is trans. Not only is this an invasion of privacy, it also can have negative consequences in a world that is very intolerant of gender difference—trans people can lose jobs, housing, friends, and sadly have even been killed upon revelation of their trans status.

Understand the differences between “coming out” as lesbian, bisexual, or gay (LBG) and “coming out” as trans. Unlike “coming out” in a LBG context, where the act of disclosing one’s sexuality reveals a “truth” about that person’s sexual orientation, disclosing one’s trans status often has the opposite effect. That is, when a person “comes out” as trans, the listener often assumes the “truth” about the trans person is that they are somehow more fundamentally a member of their birth sex, rather than the gender/sex they have chosen to live in. In other words, sometimes “coming out” makes it more difficult for a trans person to be fully recognized as the sex/gender they are living in.

If you don’t know what pronouns to use, ask. Be polite and respectful when you ask a person which pronoun they prefer. Then use that pronoun and encourage others to do so. Be patient with a person who is questioning their gender identity. A person who is questioning their gender identity might shift back and forth as they find out what identity and/or gender presentation is best for them. They might, for example, choose a new name or pronoun, and then decide at a later time to change the name or pronoun again. Do your best to be respectful and use the name and/or pronoun requested.

Don’t try to tell a person what “category” or “identity” they fit into. Do not apply labels or identities to a person that they have not chosen for themselves. If a person is not sure of which identity or path fits them best, give them the time and space to decide for themselves.

Don’t assume what path a trans person is on regarding surgery or hormones, and don’t privilege one path over another. Affirm the many ways all of us can and do transcend gender boundaries, including the choices some of us make to use medical technology to change our bodies. Some trans people wish to be recognized as their gender of choice without surgery or hormones; some need support and advocacy to get respectful medical care, hormones, and/or surgery.

Don’t ask a trans person what their “real name” is. For some trans people, being associated with their birth name is a tremendous source of anxiety, or it is simply a part of their life they wish to leave behind. Respect the name a trans person is currently using.

Don’t police public restrooms. Recognize that gender variant people may not match the little signs on the restroom door—or your expectations! Encourage schools, businesses and agencies to have unisex bathroom options, and offer to accompany a trans person to the bathroom, in a “buddy system,” so they are less vulnerable.

Don’t just add the “T” without doing work. “LBGT” is now a commonplace acronym that joins lesbian, bisexual, gay, and transgender under the same umbrella. To be an ally to trans people, gays, lesbians and bisexuals need to examine their own gender stereotypes, their own prejudices and fears about trans people, and be willing to defend and celebrate trans lives.

Know your own limits as an ally. Don’t be afraid to admit you don’t know everything! When dealing with a trans person who may have sought you out for support or guidance, be sure to point that person to appropriate resources when you’ve reached the limit of your knowledge or ability to handle the situation. It is better to admit you don’t know something than to provide information that may be incorrect or hurtful.

Listen to trans voices. The best way to be an ally is to listen with an open mind to trans people themselves. They are the experts on their own lives! Talk to trans people in your community. Consult the reading and film lists of this Allies Toolkit to find out where to learn more about trans lives.”

Have your organization get a LGBTQ inclusivity training from Out Boulder!