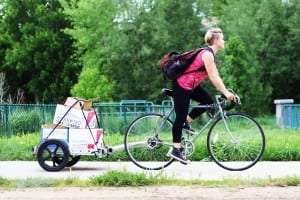 As Boulder Food Rescue strives to fulfill our mission to educate communities about food waste, we’ve decided to start up one of our projects again: our BFR blog!

We’re very excited about the opportunity to create a media platform to catalyze conversations about food security and justice in Boulder. Apart from pedaling food around, we’re excited to continue our collective learning around food and social change online.

With this blog, Boulder Food Rescues hopes to connect our local efforts addressing food security with global movements and celebrate this brilliant work.

Please stay tuned for articles exploring issues of food and its link to social justice.

Want to Get Involved?

Whether it takes the form of interviewing recipients and sharing their stories to writing pieces that critically analyze the U.S.’ food system, we would love to have you join the crew.

If you’re a media whiz or just like writing, photography, graphic design, or videography, please reach out! For more information about the blog and future meetings, please contact [email protected].

Our monthly newsletter will fill you in on what’s happening and even share some of our tips and tricks.